Posted on March 4, 2013 by rongatesphotography

Everyone gets along very well.  Most of the passengers have traveled extensively.  Enie (pronounce onya like Sonya without the “S”) is a artillery officer in the Irish Army.  She’s on a one year leave and has been to India, Miramar, Thailand, and is now traveling through Ecuador and Bolivia before heading to Europe for a short time.   She’s seen here with Linda from Winnipeg in the center and my roommate, Douglas. 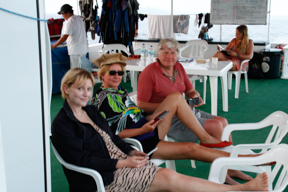 Roger and Jane Boyce are from near Detroit.  They’re the only other Americans on the boat.  I’m not sure if they’re related to a friend with the same last name in Grand Island but I believe he comes from near Detroit, as well.  They’re retired school teachers and have done a major trip each year for the last seven. 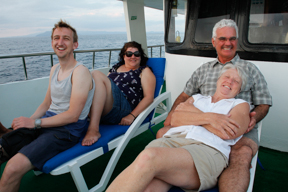 The couple on the right is Tom and Monica.  They’re from Switzerland and don’t expect to get back home until next October.   That’ll be about a year since leaving.  Tom was with an airline as a flight attendant.

Brian in the red shirt is on the trip with his significant other, Ann-Marie.  They are from Calgary.  Jordan on the right and the young lady on the right, Gemma, are from Australia.  They are 23 and they hope to be gone for a year.  They’ve already been on the road for 4 months. 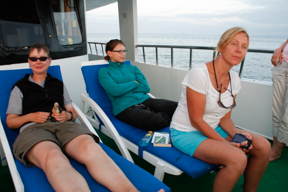 The two with the glasses are both named Britta and both are from Germany although they didn’t know each other.  Britta on the left quit her job as a software consultant to travel a while and Britta on the right is a mechanical engineering student.  The lady in the front is Connie and she’s also from Switzerland. 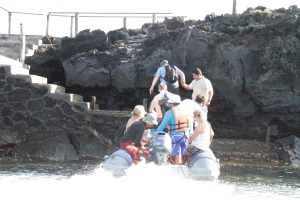 After a dry landing, we hike to the top of a volcano on Bartolome…345 ft….on a wooden staircase/boardwalk.  No wildlife to see but a nice view of the cove where we are anchored with several other boats. 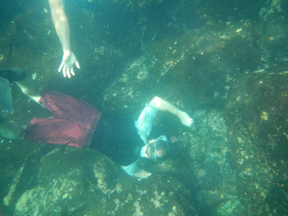 After dinner we move to Isabela, the largest island in the Galapagos.  We’re going to climb the second largest volcanic caldera in the world.  It’s 4500 ft although we get a bus ride to the trailhead it’s still a pretty good climb to the top.

Once there, we’ll see the caldera that is approximately 5 miles by 7 miles.  This volcano last erupted in 2005.

In the afternoon, we visit a land turtle breeding facility and see some rather large turtles but since I’m more interested in seeing them in the wild a little later I’m going to skip showing you them now.

We also get a little time at Beto’s Bar to have a beer, enjoy the beach and use the internet.  I posted from here last Wednesday but couldn’t get any pictures up.  Here they are now.

Tomorrow is going to be one of the best wildlife days of the cruise.

1 Response to The Galapagos Cruise Continues