A few walks around Puerto Ayora

Posted on March 6, 2013 by rongatesphotography

The people here are very friendly and I have no fear when walking through the town.  I’ve ventured away from the downtown area on several occasions to see residences and about the only thing you have to watch out for are taxis.  The right-of-way doesn’t belong to the pedestrian. Here are a variety of scenes from around town. 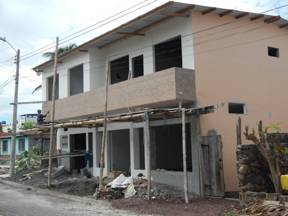 I shot the first picture because I knew my friend, Bill, would enjoy the bamboo used for the scaffolding. 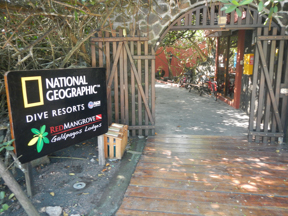 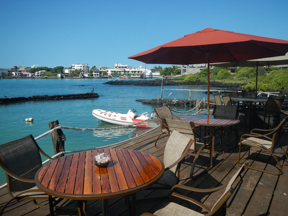 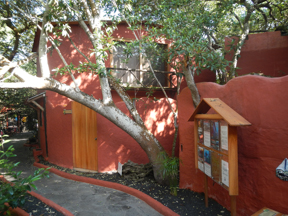 This is one of those more expensive hotels.  This afternoon I had to have a check scanned and emailed to a lodge in the jungle so I stopped at one of the oceanfront hotels because I knew the front desk people would speak English.  The young lady told me it was $330 per night…BUT, that included breakfast. 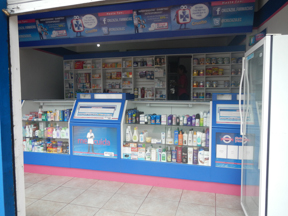 Local produce or you can get it right off the truck. 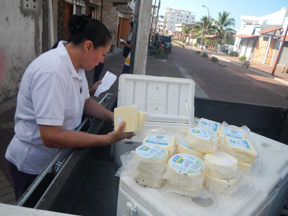 Later in the afternoons and into the evening, there are a number of street vendors with watermelon, cakes, pastries, ice cream, etc. 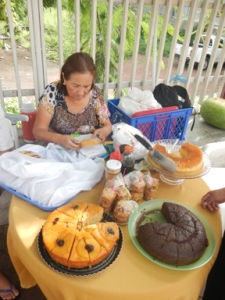 I had a piece of this chocolate cake.  It was great and the portion was huge.  Cost me $3.

Couple of restaurants.  There are dozens of mom and pop places along with quite a few more established places to eat.  So far, I’ve stuck with the those.  Most all of them are open air places. Also, most stores don’t have their lights on during the day to reduce the heat.  They’re only turned on in the evening.  Even then, almost all the bulbs are flourescent.

This was lunch at a small restaurant across from my hotel. 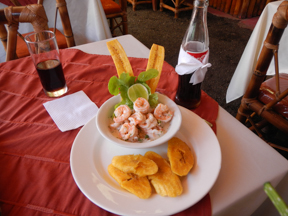 This is a shrimp ceviche.  It is fresh shrimp in a lime/onion juice with double deep fried bananas.  Later, I’ll show you how those bananas are made.  I watched it being done.  Notice the Coke in a bottle.  No cans of Coke.  Actually, while some residences have lots of discarded junk in their yards, the streets and sidewalks are kept very clean.  They are very environmentally aware. 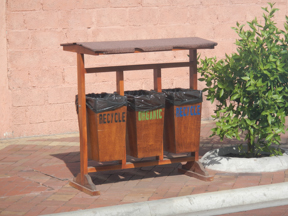 A bin for paper, plastic and organic.  Street sweepers are out most mornings.

The main streets have a bicycle lane nearest the curb and brick paving.  There’s lots of construction going on in downtown to make it modern for tourists.  The back streets are narrow and not as nice.

Last night I went to the fish market.

After the market closed, a street vendor set up shop with his whole family.  He deep fried some kind of fish whole…head, tail, etc….People where lined up for it.  You got a whole fish, rice (of course) some fried bananas and salad.  All for $5.  The way they fix the fried bananas is quite interesting.  They peel them (obviously) slice them into two-inch chunks, deep fry them, then mash them with a mallet and deep fry them again.  The are delicious.  I’ve had them several times in restaurants. 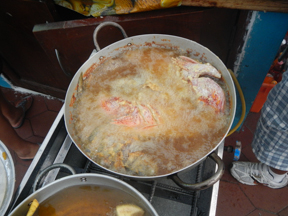 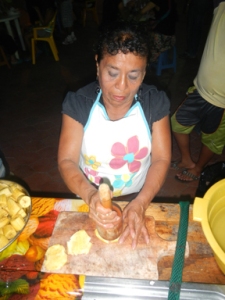 I think I’m going back there tonight and have a dinner for myself.

Here’s my dinner from last night.  Shrimp in a coconut and passion fruit sauce, rice (yippee) and friend bananas.  The small bowl had spicy sauce to dip the shrimp into.  It was quite good but cost me more than $5.  A fair bit more!

While I was at the fish market, the pelicans and sea lions hang around looking for handouts or droppings.  If you notice this pelican has a fish in his throat and is working it down to his stomach. 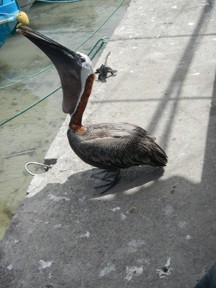 There’s also a small marine iguana in the background.

So much for enriching your culinary knowledge.  This morning, Wednesday, I was off to get a small load of laundry done before leaving the Galapagos tomorrow.  This bus was loaded with kids in a summer program headed off to some activity.

From here I took at five mile round trip walk to Tortuga Bay.  This has got to be the most beautiful white sand beach I’ve seen here.  The walk is along a brick paved path.  There are two beaches here.  One for surfers and, further on, one for swimmers.  Frankly, after walking to the surfers beach I took my pictures and visited with a young guy who had been to college in Florida and then I headed back.  I was soaked with sweat.

My timing was almost perfect.  I no sooner got back to my hotel and it started raining.  So far, I’ve been pretty lucky.  It’s only rained one other day.  The rain doesn’t last more than a half hour and the sun is back out.

The other day I showed you the courtyard at my hotel.  Here’s the front and my room. 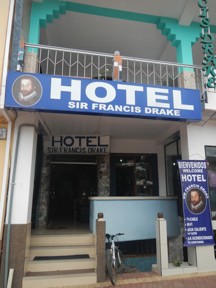 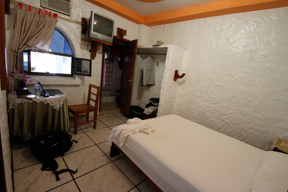 Don’t everyone rush out to book this place.  I’m staying one more night.  It’s clean and even though the staff, Louis, at the front desk and the maid, don’t speak English, they always smile at me and say “Ola!”

I’m leaving early tomorrow morning for Quito.  Then on Friday morning I’ve made arrangements to go to the jungle to the Sani Lodge for five days and four nights of tent camping on a raised platform to keep the caimans away.  At least, I hope it keeps the caimans away.  Caimans are South American alligators.  They are night hunters, I’m told.

Interestingly, today I emailed a copy of my personal check drawn on a Dallas bank as payment in full.  I do have to give them the real check when we meet up at the airport but they accept cash, credit card with a 4% penalty, or a check drawn on a U.S bank.

One last thing.  On our cruise last Thursday a couple of fisherman dropped two tunas off.  The crew cleaned them and several of our group sampled a freshly cut piece of sushi.  (I wasn’t one of them)  We had tuna steaks that night for dinner. 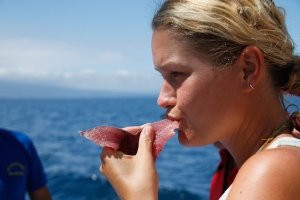 That’s Joline from the Netherlands. She joined us mid-week for a four-night trip.

I believe I’ll be out of touch after tonight until at least next Monday when I return to Quito.  I know I have to have matches to light a candle at my campsite for light so I doubt if they have Internet service.  Maybe at the bar.  They have everything at the bar.