This Little Piggy Went to Market in Otavalo and Cotacachi

Posted on March 17, 2013 by rongatesphotography

It was a 35 minute flight from Cuenca to Quito.  It took two hours and $27 by cab from the airport to the north bus terminal in Quito.  From there it took two hours and $2.20 from Quito to Otavalo.  The bus stops whenever a passenger signals that he/she wants off.  They stop for people to get on, too.  There is a bus driver and another guy who works the aisle collecting the fare and helping folks off and on.  The bus barely comes to a stop.  It’s more like a rolling stop.

I walked about 6 blocks to my hostal, Rincon del Viajero.  Room is a little smaller than in Cuenca but it’s clean and breakfast is included for $14 per night….including hot water. 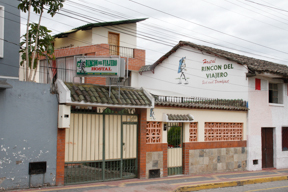 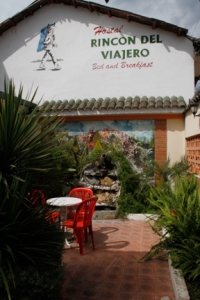 This is the street front and the inner courtyard.  My room is straight down this corridor and to the right…#3. 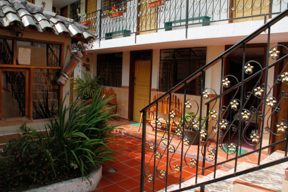 That’s my room in the center of the picture on the right.

It’s about three blocks to the Plaza de Ponchos where a regular group of vendors are set up seven days a week.  At the end of the day, they load of their goods on their backs and move them out. 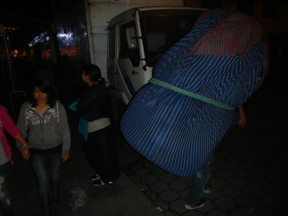 Friday night a large stage was set up in the middle of the street and beginning about 4pm the bands started playing. 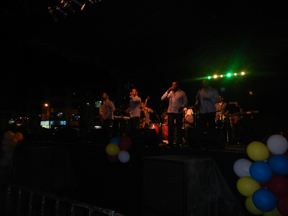 I had dinner at a Chinese restaurant (I know, I’m in Ecuador) and didn’t recognize anything on the menu so I went with one from column A and one from column B.  I got a side of rice, chicken in a sauce with peppers, mushrooms, onions and a vegetable yet to be determined.  Price $3.  It was filling and good.

On Saturday, the market takes over all the streets around the plaza and a number of side streets, as well.  The regular vendors are on the Plaza and the street vendors are only here on Saturday. 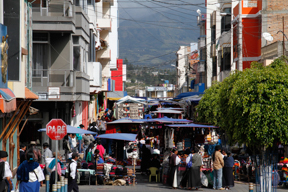 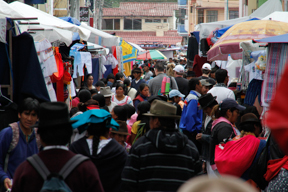 As I move through the crowd, I’m offered ponchos, blankets, gold jewelry, food, hats and just about anything else. 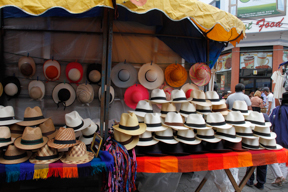 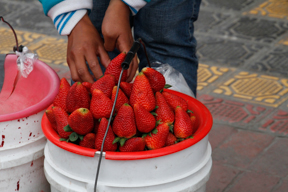 Even as they are trying to make a sale, the ladies are often still working.

While everyone wants you to buy their goods, no one is pushy.  A simple “No, gracias.” usually does the trick.  And like everywhere else in Latin America, everything is negotiable.  There are also food stalls set up around the plaza. 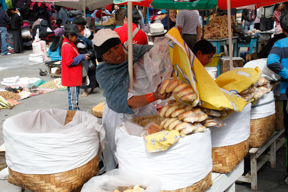 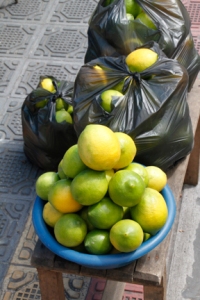 Aren’t those the largest limes you’ve ever seen?

Market day is a day that every one comes to down and you have to bring the kids, too.

After lunch I grabbed a taxi and went to the top of a large hill I guess you’d call it to the Parque Condor.  They told me at the hostal it was about an hour walk or $4 by taxi.  I’m really glad I took the taxi.  The Parque Condor is a rehabilitation center for birds of prey…hawks, eagles, condors, etc.  They are all inside wire but I don’t recall ever seeing a condor before even in a zoo.

Their wing span is 6-7 feet.  One of the guides did a flight demonstration with a female, juvenile bald eagle.  This one, actually. 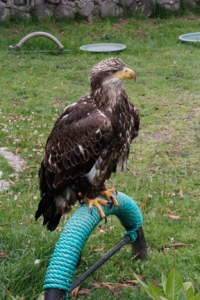 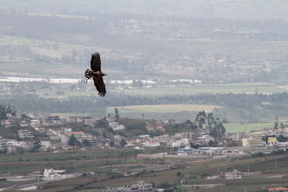 Today, Sunday, I took a bus north to Cotacachi.  It’s about a half-hour ride for 25 cents.  It’s market day in Cotacachi and one of the things they’re known for here is their leather goods.  The market is similar to the one I showed you in Cuenca.  It’s largely indoors and has all the fruits, vegetables, meat, fish, grains, etc. that you see elsewhere.  The leather goods are in shops on the main street.

Men’s leather jackets, made locally, ran $125 – $160.  I’m sure there was more expensive and cheaper ones but if you were paying cash the price was negotiable.  Leather hats about $18-$20.  Men’s wallets $7-$10.  Sorry ladies, I didn’t price purses.  I wandered through some of the shops and the market for a couple of hours and then caught a bus back to Otavalo.

Tomorrow, I’m leaving for Mindo for a few days.  I’ve reserved a hostal there for $16 per night breakfast included.  There is an Italian couple here that I think is going to travel with me.  We have to be in Quito in time to take the 4pm bus to Mindo.  It’s about 2 hours west.  We’ll leave here around noon.

An interesting side note.  Yesterday, there was group of young people in the office when I was leaving for the market.  When I ask them where they were from one said she was from southwest Missouri.  Later I ran into them in the market and I ask where in southwest Missouri and she said, Monett.  I asked her if she knew a coach by the name of Jerry Hudson and she said, “Oh, my God.  He was my high school track coach. He and his wife go to my church.”  Well, I told them he was in my high school graduating class.  It’s a small world.