The Colors are Changing! RTW Blog #7

Posted on September 26, 2019 by rongatesphotography

Today is Thursday and I’m killing time in my hotel room before my train departs at midnight.  They’ve been nice enough, for half the daily rate, to let me stay here rather than sit on a hard chair at the train station for hours.  It’s a two-hour trip to Taiga, then two-hour wait and then a 4am train that arrives in Irkutsk at 8:30 Friday morning.  Not much sleep time tonight.

I haven’t seen much of the countryside except from the trains.  Most of my time since arriving in Russia as been in cities.  The smallest being Tobolsk which was only 100,000 people.  Tomsk, where I am now, is about 600,000.

I have shot some images of the changing colors from my window on the train.  Not great shots but something different to look at.  Lots of birch trees along the way. 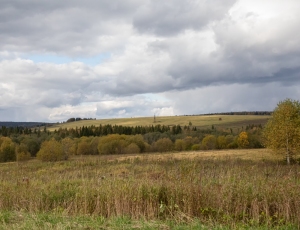 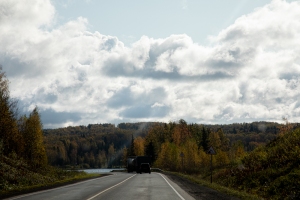 One of my blog readers, Roger from somewhere on his boat, ask about grocery store shelves.  Were they as empty today as in the 90’s?  The answer, as best I can determine, is “no”.  I’ve been in several small convenience stores and one larger grocery store.  They seem just like at home.  Although I was a little surprised to see watermelon in mid-September. 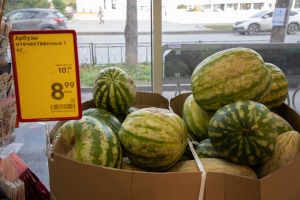 I noted two things.  These sweet potatoes look like they came directly from the ground.  There was still dirt on them.  Second, yesterday while sitting in a bakery having a pastry, I man came in with a basket of fresh strawberries and sold them to the bakery.  He poured them out onto a tray sitting on a scale and got paid for them.  I wouldn’t be surprised if the same thing hadn’t happened with the sweet potatoes although they may have come from a nearby commercial farmer since they were in a box.  But washing them off wasn’t part of the delivery process or the display process!

I may have mentioned this previously but everyone I’ve encountered from the store clerks to the hotel receptionists and people on the street, in general, have been extremely friendly.  I had one occasion in a train station where a younger guy (compared to me, most of them are younger guys) came back to me and carried my large duffle up a long flight of stairs.  There’s no question, as an American, I’m an oddity to most people.  I don’t think they see many of us, especially outside of Moscow.

One other note.  I forgot to mention it but the city of Yekaterinburg was off limits to foreigners until 1990.  The city had specialized in armament research and production since WWII.   It was also named Sverdlovsk until 1991.