Night Photography and the Man I Met at Breakfast!

Posted on September 29, 2019 by rongatesphotography

After arriving in Irkutsk yesterday morning, I headed for a couple of cathedrals near the shores of the Angara River.  The Church of Our Saviors and the Cathedral of the Epiphany.  I captured some images during the afternoon and then I went back last night after dinner to try and get a few more. 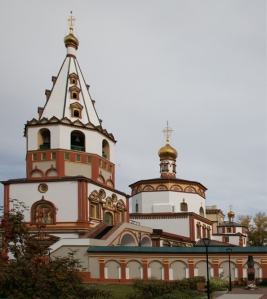 Part of the Church of the Epiphany. 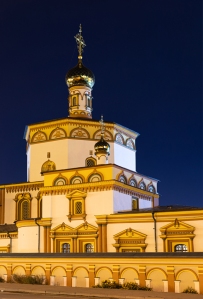 Church of Our Savior.

The interiors of both of these churches are amazing but like so many others, photography is not permitted.  I understand why but it would be nice to share it with everyone.

Lastly, I’d like to tell you about a man I met at breakfast.  He’s a carpenter in a small town in southern Norway. A town of about 5000 people.  About double the size of the town I live in.  He’s been on the road nine weeks so far.  And when I say ‘on the road’, I mean on the road.  He’s driven from Norway to Bangkok, Thailand through Europe, Turkey, Iran, the ‘Stans’…the former Russian countries bordering Russia on the south, Thailand, into Mongolia and now he’s here in Irkutsk.  He’s 39 year old.  Yesterday he took his very small car to a transportation company to have it shipped to Moscow.  He doesn’t want to drive the 5000+ kilometers across Russia.  He’s going to take the train.

He told me he’s felt totally safe everywhere he’s been including driving through Iran.  He says the people have been great.  That’s pretty much been my experience but I haven’t traveled across Iran either.

Maybe it’s a little different because he’s Norwegian and not American but, frankly, I doubt it.  As one reader commented earlier, “people are people.  We all have the same desires to be happy and safe.”

He told me that back home people think he’s crazy.  I can relate to that.  Why is he doing this?  He says he’s trying to broaden his views of the world.  He said, “You and I, we’re ambassadors for our countries.”  I hadn’t thought of it that way.  He has a laundry list of places he’d like to visit next.  He’ll soon to be 40 and I’m a lot older than that.  He’s going to get to a lot more places than I am.  But I keep trying, as long as my kids keep paying for my trips.  If only they knew they were!

I’m  headed for Lake Baikal tomorrow, Monday.  The world’s largest fresh water lake about an hour and a half south and east of here.  This lake is more than a mile deep and it’s said that if all the water on this planet dried up, this lake could supply water to the entire world for 40 years.  It’s larger than all the Great Lakes combined.  Specifically, I’m going to Olkhon Island, a banana shaped island that’s roughly 40 miles by 9 miles.  The island got it’s first electric lines in 2005.

See you in a few days!