Posted on October 6, 2019 by rongatesphotography

Our trip took us around the southern tip of Lake Baikal.  We literally ran right beside the lake.

Most of the color change is over.  There are still some trees with fall colors but all the birch trees have shed their leaves.  There are a couple of towns right at the southern tip of Lake Baikal and people are out on the lake fishing.

I’ve tried several times to get a photo of our train as we were making a turn but there isn’t anywhere available on the train without shooting through a window.  A window that is not able to be opened and is usually not clean.  Here are two images.  One is of our train and the other of a freight train that will cross paths with us shortly on a neighboring track. 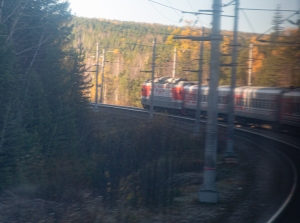 My first full day in Ulan Ude I wanted to visit the Tibetan Buddhist monastery, the Ivolginsky Datsan, the center of Russian Buddhism, about 20 miles outside the city.

Before the Revolution, there were hundreds of these monasteries in the area.  Almost all were closed and the monks sent to the Gulags in the 1930’s.  In 1945, Stalin gave permission for this datsan to be constructed here as a mark of gratitude for Buryatiaya’s help during WWII.  The Buryats are native to eastern Russian and are largely Buddhists.

My translator, Anna, presented me with a prayer shawl

and took me on a 45 minutes guided tour of the monastery.  You can photograph anything outside the temples but, as normal, nothing on the inside. 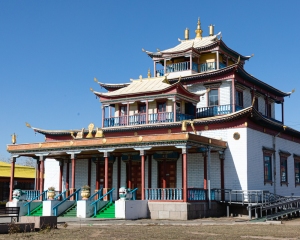 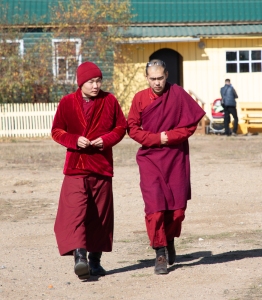 I was instructed that you walk clockwise around the temples and when you go in them you never turn your back on the deities…you back out of the temples.

There are prayer wheels everywhere.

All different sizes and designs.  They are said to contain many prayers for your good health and happiness and all of your family and the people you know.  You are to turn them clockwise as you walk past them.  I would guess I turned fifty prayer wheels as I walked around the datsan.

This monastery is also a university for buddhists.  There are about 100 students here and they are here for eight years.  After completing their studies here, they go to another location for another eight years.  They have dorms here and instructors have small homes.

There are different temples dedicated to different deities, both male and female. And Buddas are in every temple.  I’m sure I’m missing some of the many points that Anna told me but my note taking leaves a lot to be desired.

There are eight major holidays in the life of the monastery and only on those days are some of the temples and gates opened.  This is one of those gates. 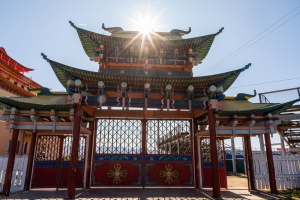 It was a very interesting experience.  I learned a lot more than I shared here.

For most of its recent history, Ulan Ude had many military bases in the area and was off limits for foreigners until about 1990. Princess Anne of Great Britain led the first royal tourists in since the Tsar’s execution in 1918.

Another of the sights in Ulan Ude is an enormous head of Lenin on display in the main square.  It is roughing 25 feet high and weighs 42 tons.  Local Buryats think it may have been put there as revenge for their resisting Sovietisation. 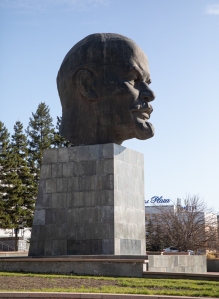 Lastly, for today, upon arriving back in town and stopping at the main square, there was a folk festival getting underway.  I stayed around and shot some images of the dancers, singers and people in costume. 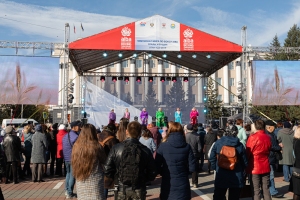 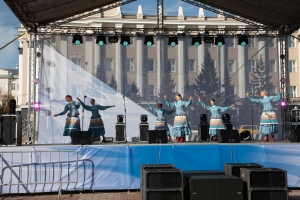 This last gentleman is not in costume.  He is a monk from the datsan and was here for the celebration.

I leave at 7am tomorrow morning, Monday, by bus for Mongolia, the home of Chinggis Khan.  Ulaanbaatar, the capital, is said to be the coldest country capital in the world.  I don’t think it will be while I’m there.  I’ll spend a few days in the capital then I’ll fly to western Mongolia to join a small group for a week visiting eagle hunters.

I’m not sure what my Internet service is going to be like especially between the 10th and the 18th.  So if you don’t hear from me don’t start worrying until after the 18th.