Five Days with an Eagle Hunter

Posted on October 16, 2019 by rongatesphotography

I was lucky.  I was a tour of one.  Last Friday the 11th, I flew on Hunnu Airlines from Ulaanbaatar to Olgii in Western Mongolia.  A flight of about 2 hours.  We were about 40 miles from Russia and and maybe 400 miles from China. I’m going to do two blogs on this part of the trip.  One on eagle hunting and one that explains the life of a nomad (as I understand it). I was met at the airport by our guide, Dauit (pronounced “doubt”) and driven to the office of the tour company, BlueWolf Travel.  There we teamed up with Muhommed. 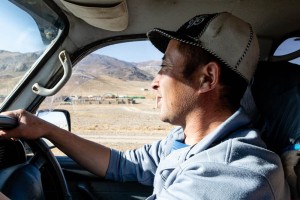 our cook, and we headed southeast about 5 hours to meet our eagle hunter, Erbol.

He lives in the village about 1-2 miles from his ger camp (pronounced “gear” like in fishing gear.)  He has three sons and two daughters.  All are married but the daughters live with their husband’s families.  Two of his sons live in the ger camp and are herders like their father.  The youngest one lives in the village and is a math teacher.  When he isn’t teaching, he works with the rest of the family.

We stayed in a ger. This one.  Erbol virtually lived with us.  He ate and slept in the ger.  He doesn’t speak English.  The only English speaker was Dauit, our guide.

There are two types of ger, Kazakh from Kazakhstan, and Mongolian.  Kazakhs are larger and taller.  Mongolian ones are a little smaller.  About 20 ft. in diameter.  The floor is covered with a rolled vinyl flooring.  Loose.  I’ll show you the inside of one in the next blog.

Life in the ger wasn’t bad at all.  We had running water.

It was running in the stream about 100 yards from our ger.  It was used for cooking and cleaning.  Everything was boiled.  We brought bottled water but most of the time we drank hot tea.  This is the water we made the tea from.

We had central heat.

Dried cow and yak dung.  This is low cost and readily available.  And they heat very well.

Anywhere out behind the ger!  Bring your own paper.

There was no electricity although the two sons had small solar panels that charged a car battery for dim lighting.  Despite the lack of electricity.  Everyone had cell phones and Facebook and there was Internet in the village that reached out to the ger though I never tried to connect.  There was no TV or computers.

The first full day, we saddled up four horses and Erbol and I posed for a shot of me on one of the horses.

Eight hours later, after traveling high up into the neighboring mountains and shooting lots of images, I determined that this would be my only day on a horse.  There is a ring on the back of the saddle and I wore a blister on my tailbone from it and decided that eight hours was more than I could handle in one day.  But I got some great shots including some ibex and Argali sheep.

Back to eagle hunting.  There are only about 140-150 eagle hunters left.  Erbol’s father was an eagle hunter and one of his sons is as well.  It is now primarily a hobby sport.

Erbol has had this particular golden eagle for three years.  He has two others that he’s currently training.  It takes about two months to train an eagle to hunt.  When not hunting….like when going to a location and searching for fox and rabbit…Erbol puts a hood over his head to keep him from being distracted.  Once the eagle hunter spots prey, he removes the hood and sends the eagle on his way.  We were not successful in finding any prey during our trip.   But we found some great scenery.

The landscape was always a beautiful sight.  Here a herd of sheep and goats set against the mountains.  There are no fences.  There was snow in the higher elevations and the temperatures were in the 40’s during the day on the plains. At night it got much colder. 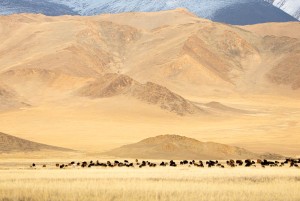 The mountains were beautiful. Even at night with a nearly full moon.

Erbol demonstrated how he works with his eagles to train them.  He’ll leave it somewhere in the mountains not far from where he is and then ride onto the plains. Then he calls the eagle and holds up some raw meat.  The eagle takes off and flies to his arm.  In the following images you can see the eagle as he’s approaching the eagle hunter, then just before he lands and, finally, as he lands on Erbol’s arm. 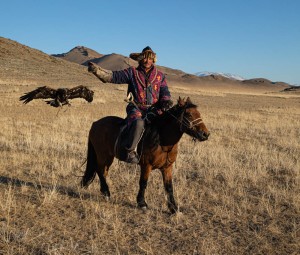 Nights in the ger got cold.  I don’t know the exact temperature but in the morning when the cook sliced cucumbers and tomatoes for breakfast, they were nearly frozen.  Kaspy always had something different for breakfast, fried eggs, sausage (which we call hot dogs), cereal and milk, bread, cookies, jam, butter, and, of course, hot green tea.

I slept on a cot with two sleeping bags and was very comfortable.  The ger was domed…kinda like the Cowboys stadium…when you pulled the rope one way it opened it to let in sunlight and when you pulled it from the other side of the ger it closed.    You never pulled it all the way open. Just a little.  I don’t think Jerry has anyone pulling a rope but you get the idea.  During the night, with the roof closed, it is very, very dark.  The door serves two purpose.  Obviously, a way in and out and also as temperature control.  When it gets too warm inside, you open the door.   There are no windows. 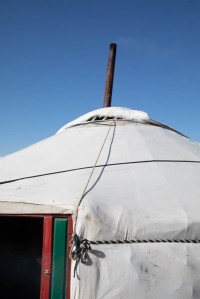 Finally, a couple of images to close this post.  First is Erbol with his wife, Makhabat.

And second, on one trip to the mountains, as we were coming back to camp and one of Erbol’s grandsons rode out to meet us and he and grandpa went galloping back to the ger. 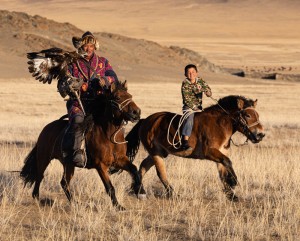 I’m sure he’ll grow up to be a eagle hunter, too.

The life of a nomad is not an easy one.  In my next blog, I’ll tell you more about their life.

1 Response to Five Days with an Eagle Hunter