Posted on March 13, 2013 by rongatesphotography

Javier had a long day planned for us on Saturday.  Breakfast at 5:30 and then it was off on a five-mile hike.

First they bailed out the boat before putting the seats back in.  Then we paddled to our starting point.  It rained much of the hike but we were primarily looking for birds.  About the only mammals here that we’ll see are some monkeys.  The birds are everywhere and the guides are amazing at spotting them. 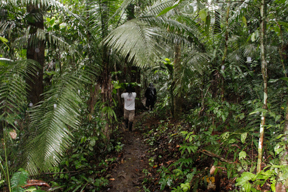 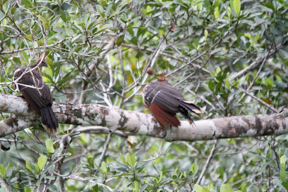 These are Hoatzin.  They are very common.  You take pictures of the first 50 and then you ignore them the rest of your time there. I’m of the opinion that that were four kinds of people at Sani Lodge.  Birders and I mean pretty serious birders.  People who had check lists that they were trying to fill in.  There was also bird photographers.  Not necessarily serious birders but serious bird photographers.  There was a Swedish couple and they had shot 50+ different kinds of hummingbirds around South America in the past 60 days.  They had a private guide for their stay.  Third, there was me.  I consider myself a decent photographer but it could be birds today, bears tomorrow and hot air balloons the day after that.  Lastly, there were people who just wanted the experience of the rainforest.  The day before I left a couple from Quebec arrived with their 6-year-old daughter and their point and shoot camera.

To be a great bird photographer you need extremely large lenses because most of the birds are some distance away and they’re smaller than a bear.  I have a decent long lens but it pales in comparison to what the big boys carry.  My Swedish friend’s wife had a lens that cost more than my entire collection of gear.  And that was just the lens.  The camera doubled that.  Anyway, I digress.

I bought a small guide from the lodge to help identify the birds the guide was calling out as he spotted them.  I’m not going to try to identify all of them here but simply show you some of what I was able to capture.  Some I’ll identify.

Common Potoo.  It’s hard to see because he blends in so well with the post he’s sitting on in the first picture. 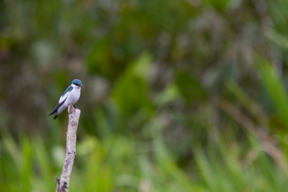 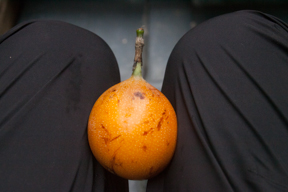 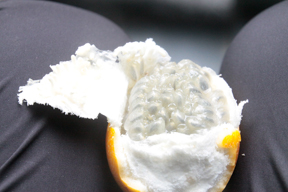 It’s in the passion fruit family and is a Granedilli. (I’m not sure on the spelling.) We stopped for a snack and got this along with a small cheese and preserve sandwich and a small chocolate bar.  The inside of this fruit is like small sacks of a substance with a seed in each sack.  You suck it out of the peeling and chew up the seed.  It is very sweet and tastes great.  The seed is like eating a rice crispie.

We did find one small, non-poisonous snake.

By noon we were back at the lodge for lunch which was always at 1pm.  Dinner was a 7pm daily.

I think I can get two more days out of this outfit.

Late in the afternoon we go to the canopy tower. You climb 210 steps to the top of the 120′ tower.  All of the birds I see are so far away I thought they were dust specks on my computer screen.  I’ll be going back on Monday and I’ll show you the pictures I got later.

Well, I’m headed out for a special dinner tonight in Cuenca.  A local delicacy.  Tell you about it a couple of posts from now.