Posted on March 14, 2013 by rongatesphotography

On Sunday, another team was going to the parrot lick but our group wasn’t.  This was something I wanted to see so I switched groups for the day.  Our guide was Fredy.  The trip to the parrot lick took about an hour first by paddled canoe, then a walk on the boardwalk to the motorized canoe and then up the river toward Coca.

The parrot lick is a place were parrots come to eat the clay on the cliff side.  They come by the hundreds.  The clay helps them digest what they’ve eaten. 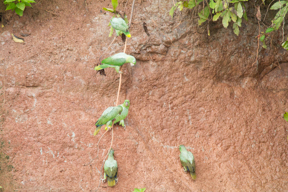 We spent about a half-hour watching the parrots.  There were two different kinds of parrots but you won’t be able to tell the difference from these pictures.

After that, we headed to the Sani community center to see them prepare their local food and look at some of the crafts they have to sell. 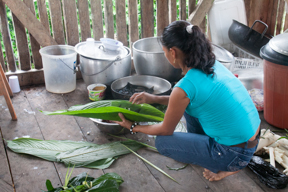 This woman was mixing fish with different ingredients in a banana leaf to put on the open fire. 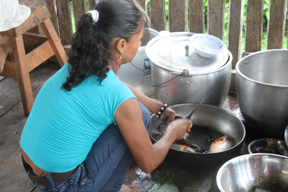 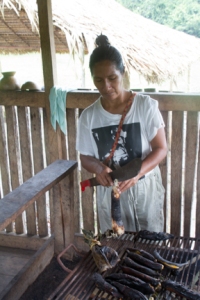 The long black pieces are bananas.  The lady in the white t-shirt is cutting off the cooked peels.

Here they have taken a large cacao and are getting the pieces out of it to also cook.  Cacao is the basis of chocolate but once cooked it tastes more like nuts than chocolate.

This was my fish.  I ate about half of it.  It was actually pretty good.  I also tried the cacao and ate one of the cooked bananas.

One of our guide’s nieces and Fredy.  The dyed markings on his face last about a week and they re-do them for special occasions. It gives them individual identities.

After lunch….and the rain had stopped…we headed out for more bird and monkey hunting.

We worked our way into some pretty tight spots.

We also spotted some squirrel monkeys and another kind I can’t remember the name of at the moment. 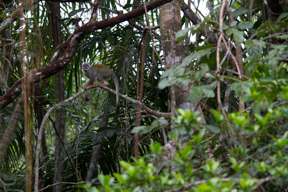 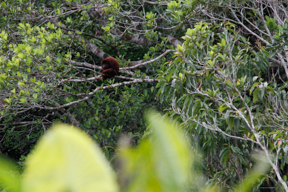 This last one is a red howler monkey.  He’s about 200 yards away.  These monkeys make so much noise.  You and here them a mile away.  It is a loud growling sound.  This was the best view we got of one.  We saw three others the day before but they were even farther away.

On Monday, another guide and I went out by ourselves since most of my original group had already left for home or other stops on their trips.  We spotted some parrots and some other birds. 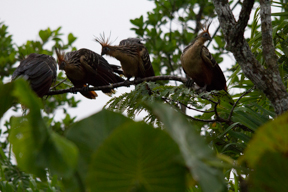 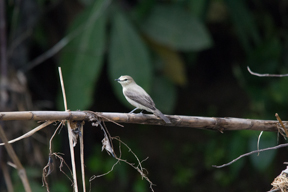 After lunch, another guest, Clinton, from British Columbia and I went back to the canopy tower.  We stayed there until after 6pm and finally, I was able to get some good pictures.  As I mentioned, the tower is 120′ high and the platform is probably about 50′ x 30′.  There are 210 steel steps to the wood platform.  The first shot is the tower from a canoe earlier in the day from some distance to show it in the top of the tree. 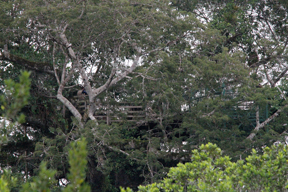 The second shot is is looking up the side of the stairs.  Next, we go onto the platform. 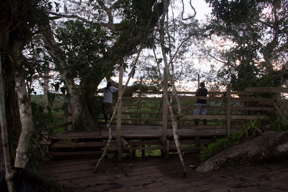 I was able to photograph six or seven different types of birds.  Clinton and the guides probably saw a few others that I didn’t get pictures of.

This is a rather rare sighting, I’m told, of a scale breasted woodpecker.

The prettiest one of all. Black-tailed Trogon.

After dinner, we packed up for an early start for the airport in Coca.  Breakfast on Tuesday was at 5:30 and Clinton and I were in the canoe at 6:30.  We got to Coca about 10 and by 11 we were on our way back to Quito.

I was met at the airport by a cousin of Fredy, our guide, who might be my guide for my next leg of the trip to Mindo.  After discussing his fees, the car rental, gas, his hotel and meals, I decided I couldn’t afford it.  Meanwhile, I went to the AeroGal counter to see if they had a seat available for Cuenca.  They did.  I booked it and started hunting online for a hostal in Cuenca.  About a half-hour later, I had a room there and one in Otavalo for Friday and Saturday and probably, Sunday and one in Mindo for the following Monday-Thursday.  I’ll return to Quito on Thursday, March 21 and spend my last days there.

My next post will cover Cuenca and I hope to do that tonight.  Then we’ll be up to date again.