Posted on September 24, 2016 by rongatesphotography

In the past two weeks, Kassie and I stayed at a campsite where the elephants came right up to a patio for guests to sit, have a beer and watch the elephants up close.  We also stayed at a campsite that had an underground hide.  You entered a tunnel and worked you way to a small room where you could be close to whatever animals showed up at the waterhole.  We witnessed large groups of elephants and cape buffalo.

But this campground…Ngepi Camp…my first camp inside Namibia has a sense of humor that I sure people go back to her homes and talk about.

As you’re driving in, there’s a sign posted on the road for 4×4 drivers. 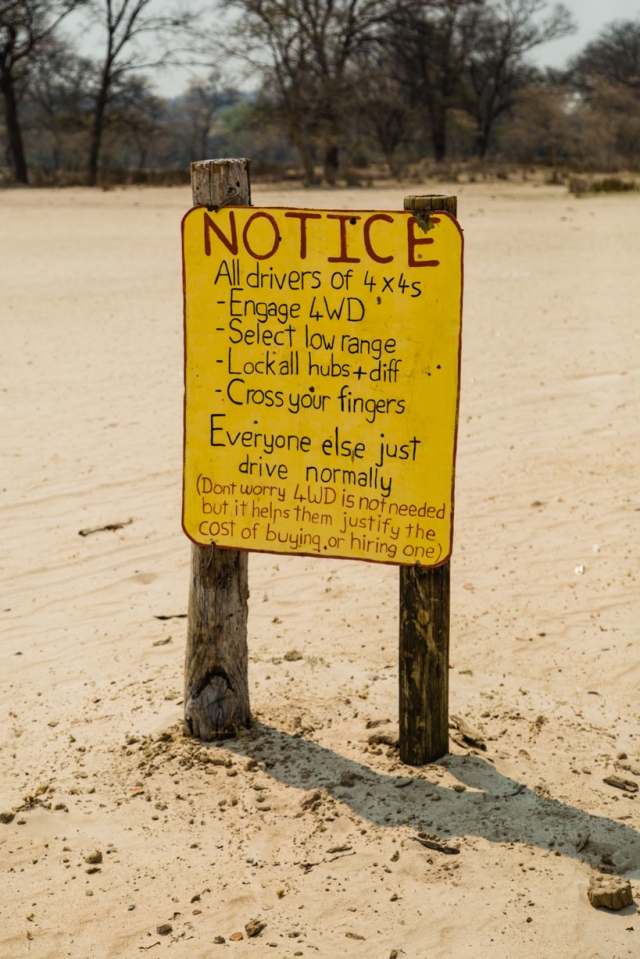 There are signs everywhere. 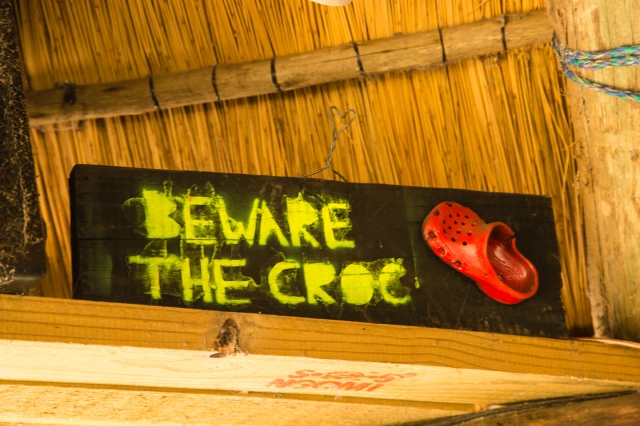 Behind the registration desk is the curio shop and the sign in the center on an upper beam says, “Nothing made in China”.

We’re all heard of shark diving cages.  This place has their own “World’s First”. 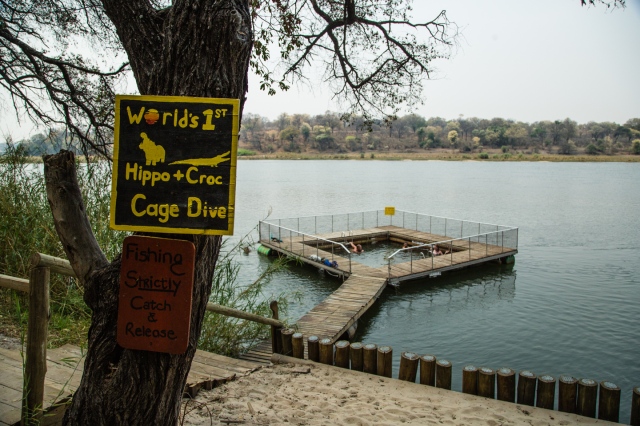 The bar’s a friendly place.

When you arrive at registration there’s a welcome board explaining all the activities available….game drives, sunset cruises, etc.  If you look at the sign…very bottom center…it says ablution tours.  Ablution blocks are what is commonly referred to as showers, toilets, wash basin and sometimes a separate area for hand washing clothes.

I thought it was another joke.

This is the ablution block I share with another campsite.  Yes it’s a unisex.  Just walk down the reed hallway and put up the stick that says “door” since there are no doors but this lets anyone entering know that it’s occupied. 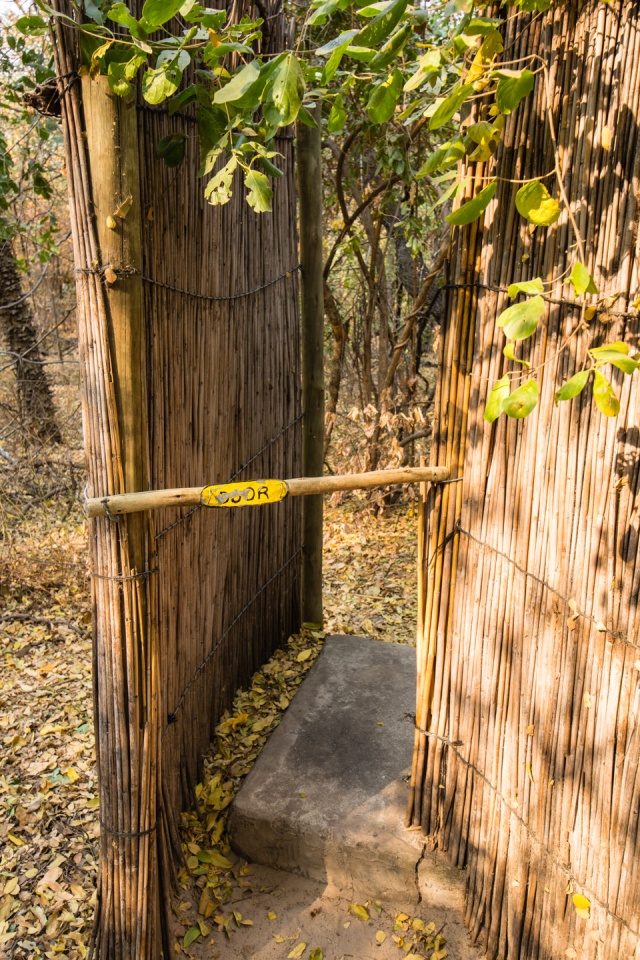 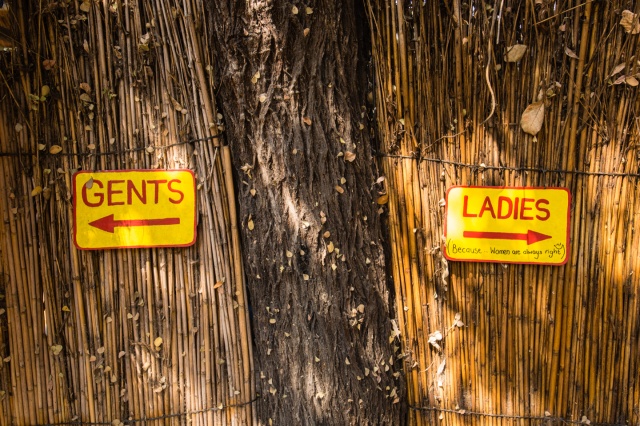 But no matter which door you enter.  Eventually you both end of here.

Notice the padlock on the toilet seat on the gents side.  The ladies get tile, toilet seat cover and small rug.  Now ain’t that nice?

Notice the bucket at the top.

The grounds at Ngepi are will attended to.  There’s a guy out raking the leaves out of the sand paths and open areas each morning.  There are three types of camping facilities.  A plain campsite like mine. 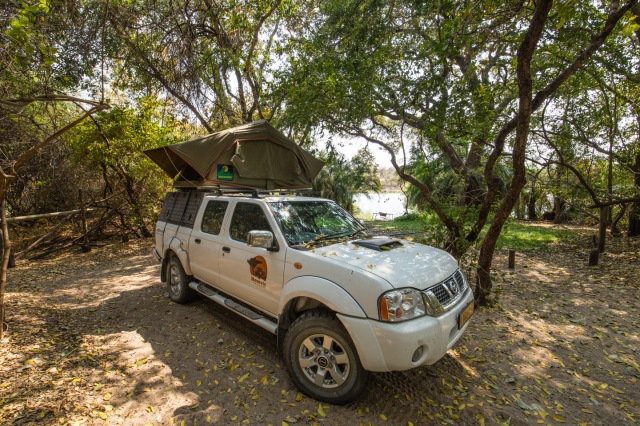 A already set up camp with bathroom inside and treehouses.  A lady from South Africa told me I could photograph her treehouse.  It has a mosquito net over the double bed but is open to the river side. 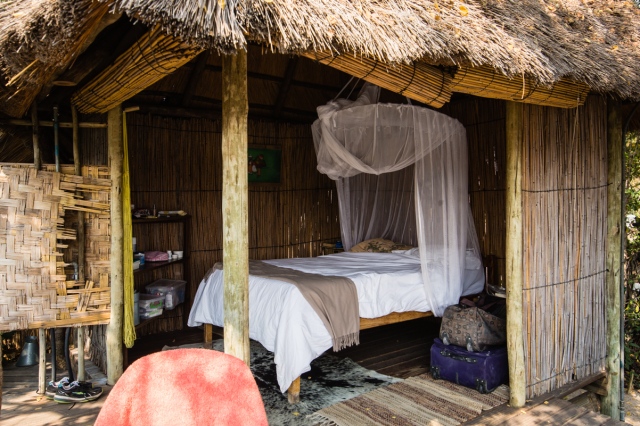 Last night Lydia tended to dinner being cooked over a wood fire in the open area. 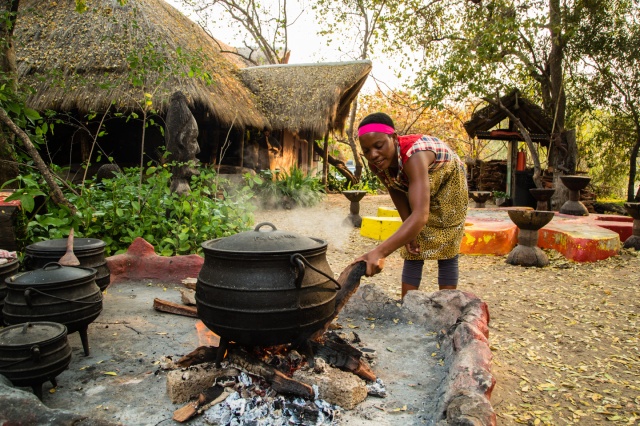 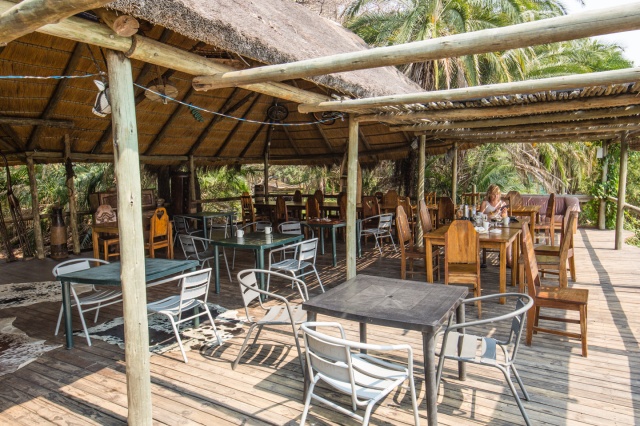 It’s been a very relaxing day here.  I move on tomorrow.

This entry was posted in Botswana/Namibia. Bookmark the permalink.