Posted on March 1, 2018 by rongatesphotography

Today I’ll begin a new blog post on my three week trip to Japan this month.  I went to photograph wildlife and landscapes.  Tokyo was just a stopover enroute to my real destinations.

I arrived in Tokyo late Friday afternoon Feb. 9.  I had departed Kansas City at 6am on Thursday morning with a change of planes in Atlanta.  From there I flew directly to Tokyo’s Narita airport.  Our track took us over Kentucky, Illinois, Minnesota, Canada, through Alaska and then turned south and ran parallel th the Russian coast before arriving in Tokyo from the north.  This arched route is actually shorter than what would appear to be a straight line from Atlanta west to Japan.

There are two airports in Tokyo, Haneda and Narita.  I arrived in Narita which was quite a distance from my hotel.  An Uber trip was $250 to the hotel and another private service was $200.  I figured there was a train that would make the trip for less.   As it turned out it was approximately $13.00 and went directly to a subway station right beneath my hotel.

View from my hotel with Tokyo Tower on the right. 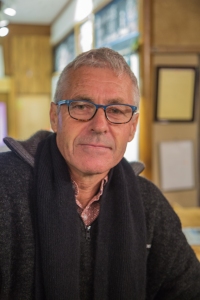 David, my traveling partner from New Zealand, arrived early Saturday morning.  David had been one of my roommates on my trip to South Georgia Island a year ago.  He’s 15 years younger than me (I know you can’t tell that by looking at this photo) and is also an avid photographer.   I had contacted him more than a year ago about joining me for this trip.

One of my initial concerns about this trip was the language issue.  Not a lot of people speak English and the graphic nature of the alphabet makes it impossible for westerners to read.  Despite this handicap, everyone we encountered was extremely helpful and friendly. 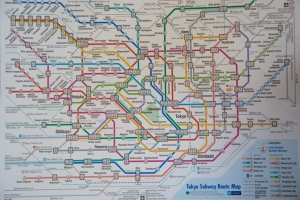 People often came up to us in the subway as we stared at the maps on the wall and ask if we needed help.  A couple of guys even helped me carry my heavy bag up or down stairs in the subway stations unsolicited.

Our first day in Japan was spent acclimating to the 9 hour time difference for me.  We went walking around a commercial section of Tokyo looking for a camera shop we had heard about. 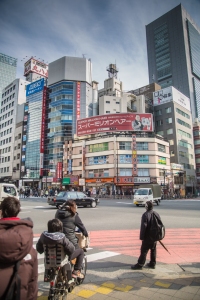 Since all the signs are in Japanese, it took us about an hour of walking first one way and then another before we were able to locate it even with an address and a simple map.

Our hotel had a dining room so there was a breakfast and lunch buffet and dinner was available from a menu.

If a hotel didn’t have a dining room, we were unable to find what we would refer to as a coffee shop.  We had more than a few “breakfasts” at local convenience stores.

The next day we left early for our trip to see the Japanese macaques or snow monkeys at Jigokudani Monkey Park.  It was two local trains, one bullet train, another local train and finally a bus to reach our hotel in Tawanuchi.  We spent a good deal of time looking for the right trains.  There are multiple levels of subways going all which ways under Tokyo.  It took us longer than we anticipated.

The high speed trains or bullet trains run up to about 165 mph.  They provide a fast, smooth ride. The cost from Tokyo’s main station to Nagano was 8200 yen or about $81.  The trip would have taken about four hours by bus but it was only ninety minutes on the bullet train.

When we arrived at our destination, we had no idea where the hostel was located.  We walked to a nearby apartment building and two gentlemen called the hostel and helped us make the connection.

Everyone was great.  The hostel was Japanese style which meant that we slept on a futon pad on the floor.  It was very comfortable.  They had a small dining room and provided a good menu to choose from.  As was the case in many restaurants, the Japanese menus often had pictures for you to use to make your meal choices. 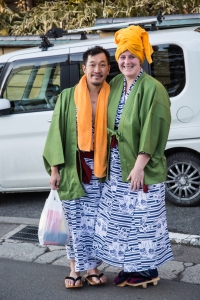 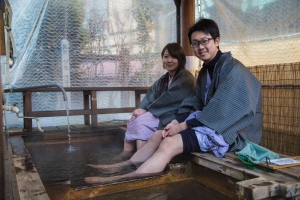 A couple coming back to hotel from public onsen (public nude baths–separate facilities for men and women).   Some hotels had their own onsens.  Others were separate facilities in the neighborhood. Each hotel had a “uniform or yagoda” for their guests.  There were also outdoors thermal pools like the one this couple are soaking their feet in.

The next morning, the hostel provided a ride to the beginning of the trail to the monkey park.  From there it was about a mile walk uphill to the park entrance.  By the time we got there, there were already a hundred or more photographers massed around the thermal pools photographing the monkeys. 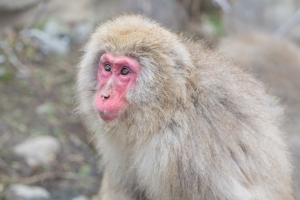 You just had to wait your turn and work your way into a spot at the pools edge.  The monkeys hang out in the thermal pool and run around just about anywhere they please.  There’s also a stream down below the thermal pool that attracts them.  We had intended to spend the day but had exhausted our photography shortly after lunch and headed back to the base of the mountain to catch a local bus back to the hostel.

The meals at the hostel were very good.  The room was comfortable and the staff was very easy to work with.  After two nights we headed back to Tokyo for one night before heading north to Hokkaido.

This entry was posted in Japan. Bookmark the permalink.