Posted on September 19, 2019 by rongatesphotography

I boarded my first overnight train from Moscow to Kazan on Tuesday evening.  I got to the train station very early because I needed to check out of my hotel.  The lack of English speakers is a daily challenge.  One I did not fully expect in Moscow.  Someone told me, I don’t know if it’s true, that only 200,000 American tourists visit Russia each year.

With a little help from a gentleman who was putting his wife on the same train, he showed me how to read the lighted timetable posted on the wall and decipher which train was mine and which track it would depart from.

My cabin in carriage #20 and berth #1.  That’s the lower berth on the left.  As you can see on the right, the seat is up and there’s a storage area underneath for your luggage.  There’s one on the right and left.  The seat back folds down to form the sleeping berth.  There are also two upper berths.  Upper berths are cheaper than lower berths. This is a second class cabin with four berths.  First class is double the fare and has two berths.  There’s also a third class and that is a double row of upper and lower berths on both sides of a main aisle with curtains.  There are two cabin attendants on each car.  One brought me my sheets, pillow case and blanket and I got to make up on own berth.

As luck would have it, I had two cabin mates, Artem and his father.  Artem spoke pretty good English and this turned into a blessing.  You can purchase snacks and drinks on board and there’s an urn of hot water always available for tea or coffee.

The ride was pretty good but every time the train stopped during the night, there were a number of jolts and they always woke me.

We arrived in Kazan a city of 1.2 million about 7:40 in the morning.  Artem and his father got a taxi and took me to my hotel.  The Volga.  After checking in, I got a taxi to the Kazan Kremlin.  The taxi cost a $1.  It’s not far but it still took about 10 minutes.

The Kazan Kremlin was built by Ivan the Terrible after he had destroyed the previous one.  Kazan is a mixture of Islam and Orthodox Christianity.  The Kremlin illustrates that. 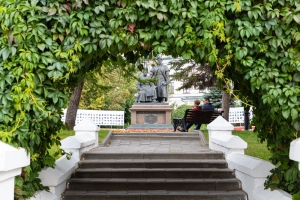 The Kul Sharif Mosque is the largest Muslim place of worship in Europe. 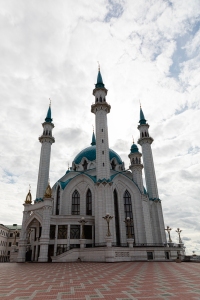 This is also the seat of government for the Republic of Tatarstan and Kazan is it’s capital.

The term kremlin refers to the wall that surrounds the area.  Again, kremlin means fortress or citadel.  All of the buildings are within the Kremlin.

Here are some other scenes. 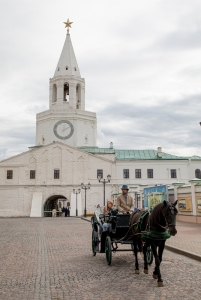 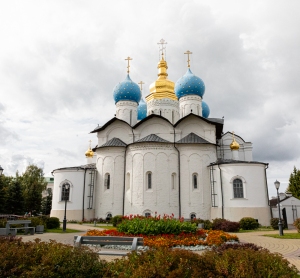 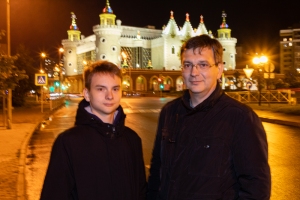 Last night, Wednesday, my cabin mate, Artem and his fifteen-year-old son, Nikita, picked me up and gave me a tour of their city.  Nikita has been studying English as a 9th grader and did a very good job with it.  Here’s a daytime picture I took of the Palace of Farmers.

And a nighttime version Artem took me to.

Our first stop though was the Temple of All Religions.  This was started in 1992. 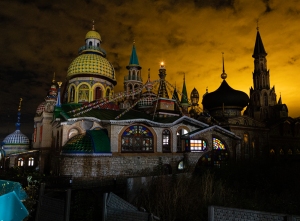 I don’t know what this looks like during the day but at night I thought it was pretty awesome.

We also got some nighttime images of the Kremlin, the promenade on the Kazanka River and the puppet theater downtown.  Kazan has two rivers running to it.  The Kazanka and the more well known, Volga.

We also went by the natatorium and hockey arena that has helped enable Kazan to be known as the sports capital of Russia.  Artem, his son and I also drove through the University where his daughter is just beginning and we walked past the president of Tatarstan residence, as well.  We spent nearly three hours touring Kazan.

Every trip I take I luck into meeting someone who stands out as a new friend.  Artem and his son are two of those so far this trip.  I ask Artem if they get a lot of Americans in Russia and Kazan.  He told me I was the first American tourist he had ever met.  Artem is 44.

I’m off to Perm later this afternoon.  I arrive there at 6:30 in the morning.  I’ll visit one of Russia’s most infamous gulags, Perm 36.