I’m not in Kansas anymore!….I’m in Asia!

Posted on September 24, 2019 by rongatesphotography

I left Russian Europe on Friday night.  I boarded the train at 11pm in Perm, Russia and sometime between then and 4 am when I got off in Yekaterinburg we crossed into Asia.

My last stop in Europe was Perm.  A city of about 1.2 million.  It is believed that Perm was the town that Boris Pasternak sent his Dr. Zhivago to and was also the inspiration that Chekhov used for the town his Three Sisters were so desperate to leave.

About an hour and a half east is Perm 36 a former gulag that is now a museum.  Officially known as the Memorial Complex of Political Repressions.  It is run by  the international human rights organization, Memorial, founded by dissident Andrei Sakharov.

The picture above shows the five levels of security between the prisoners and the outside world.  The second fence is electrified.  It wasn’t enough to kill a prisoner but it certainly gave them a jolt. 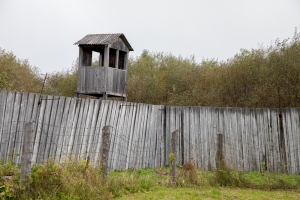 Alexander explained that the term, gulag, was often misunderstood to mean torture camp where the real definition of gulag was what the Russians referred to all of their prison labor camps.  Gulags began about 1918 under Lenin.  Perm 36 was in existence from 1946 to 1988.  It has been turned into a museum because it is the only one where many of the building are still standing. 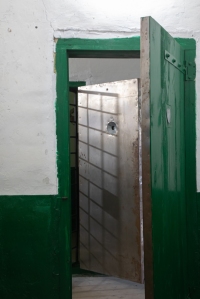 In the years from 1946-1952, it was primarily a prison for common criminals. From 1952-1972, it had those prisoners plus a roundup of generals, judges, and public officials.  Beginning in 1972 until it closed, more “dissidents”.  Writers, artists, political activities, nationalists, etc. were sent here.  Most prisoners worked.  Gulags were labor camps and high daily quotas were set.  If you didn’t make your quota, you would be put into isolation for days or weeks and you food rations would be reduced.   As Alexander explained it, prisoners in the early days worked in the logging industry cutting trees and making lumber.

Beginning in the 40’s, when Russia was becoming involved in World War II and the country was switching from an agriculture country to a more industrial one, prisoners built factories, power plants, etc.  These prisons were not like German concentration camps where people were herded into showers and killed.  One source says that 90% of those who died in Perm 36, an others like it, was from exhaustion and malnutrition or if caught trying to escape.  If you didn’t make your impossible quote every day you’d get put into a punishment cell and your daily food ration would be cut.

Prisoners were allowed to write two letters a month to relatives and receive one.  Some were allowed visitors that could stay for several days in some instances, according to Alexander.  There was a library and movies.  I would suspect that after working long, hard days there wasn’t a lot of time left for reading and movies.

From Perm to Yekaterinburg.

Yekaterinburg is famous for at least three things.  It is were Tsar Nicholas II and his family was murdered by Bolshevik soldiers and some Hungarian prisoners in the basement of a rich local industrialist in 1918 after 78 days of cruelty by their guards.  The family, the Romanovs, consisted of Nicholas, his wife, four daughters and a son.  They were brutally killed and their bodies dismembered, burned and the remains dumped into a nearby mine shaft. 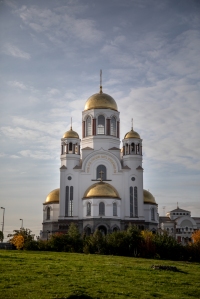 In 1976, Russian president Boris Yeltsin ordered the house where they were murdered demolished and the Church of the Blood was built at that location. Pictures aren’t allowed in the main area but are allowed in the basement museum. 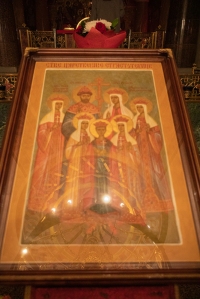 The piece on the right represents the Romanov’s, Nicholas, his wife and five children.  The Romanov’s were canonized in sainthood in 2000.  There are numerous tributes to the royal family in the main worship area and in the museum.

In 1991, their remains were discovered and through DNA testing was determined to be those of the royal family.  Blood samples from the remains were tested in the UK from samples provided by Prince Phillip, Queen Elizabeth’s husband.  The Tsarina Alexandra’s sister was Phillip’s maternal grandmother.

The second famous thing about Yekaterinburg is that this is the site were US pilot Francis Gary Powers was captured after being shot down in his U2 spy plane in 1960.  It was an embarrassment for the US as we first claimed it was a weather flight and that he’d inadvertently flown over Russia.  He survived the crash and confessed what he was doing.  He was later traded for a Russian spy by the US in 1962.

I visited the Russian military museum here because the guide book said there was a display here regarding the U2 incident but, if there was, I didn’t see it.  Otherwise I had a private, English speaking guide, that told me about all of their military history and their “liberation” of Czechoslovakia and other military conquests.  I did find it interesting to see the young inventor/soldier who designed the famous Kalashnikov AK47 and AK74 weapon then and later in life. 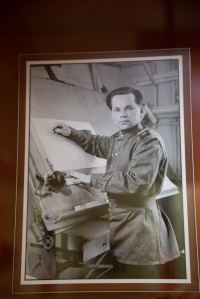 Lt. General Mikhail Kalashnikov died outside Moscow in 2013 at age 94.  His rifles are now licensed to be built in 30 countries including the United States.

The third thing that Yekaterinburg is famous for is the birthplace of former Russian president, Boris Yeltsin.

From Yekaterinburg it was an overnight train ride to Tobolsk, a town of about 100,000.  The Kremlin here sits on a large hill in town and contains several cathedrals and a prison of all things. 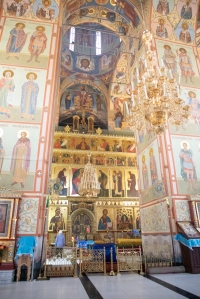 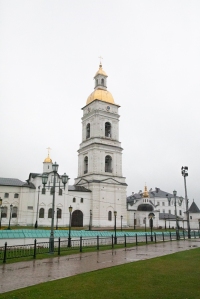 I’m moving on to Tomsk a university city know for its wooden architecture with “lace” trim on the houses.