A Horn and Trust: What Do They Have in Common?

Posted on October 21, 2019 by rongatesphotography

They are the two most important ingredients for traffic.  It took a few minutes to work up the gumption to cross the street in Hanoi.  The most important accessory on a car or motorbike is a horn.  The most important character trait in a pedestrian is trust.  I’ve seen cross walks and in a few places where there are stoplights, they seem to work.  But in places were there are no traffic controls, I think they are merely a suggestion.  So how does it work?  You simply start walking across the street moving at a steady pace.  The cars and bikes will find their way around you.  Haven’t seen a pedestrian hit yet! 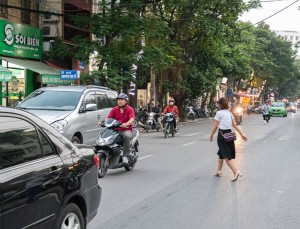 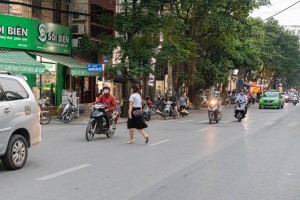 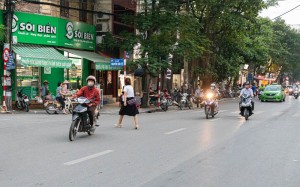 This lady wasn’t in any peril but I’ve seen them cross at rush hour and the motorbikes are flying by.

Whoever gets to the intersection first seems to have the right of way….unless maybe it’s a bus.

Spent the afternoon doing some street photography.  There is a place in Hanoi called Train Street.  It is a narrow street where people go about their lives until the train comes through then they pull the kids off the tracks and let the train pass with not much room to spare.  This has become quite a famous place for people to come and take pictures.  About two weeks ago the Hanoi government…or somebody with the power… closed Train Street.  Too many of us tourists have been hanging out there and not everyone was getting clear of the train fast enough so the train would have to slow down or stop and that isn’t good for commerce.  So now, you can’t walk down Train Street and the businesses along the street have also been forced to close.

Here’s a shot I took this afternoon looking down the track through a metal barricade.  There are police at every crossing to maintain the rule.

I went back tonight at  7pm when the only train of the day was to go down this track.  Police kept everyone back but this is what I got.

Many of the streets are dedicated to a product.  For example, I walked a street this afternoon that was all fabrics, another was electric materials: wire, conduit, etc.  Around the corner were stores selling lights. 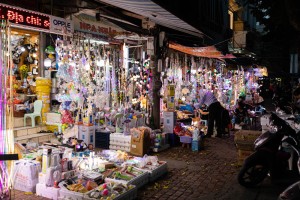 Some other random street shots from this afternoon. 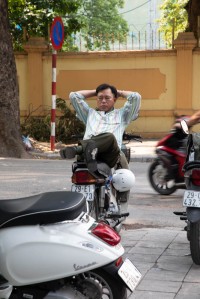 Slow day at the office! 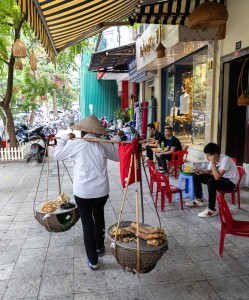 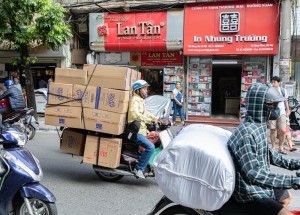 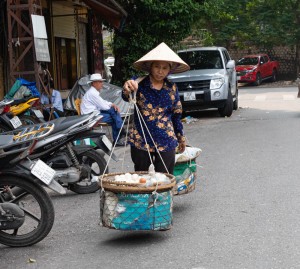 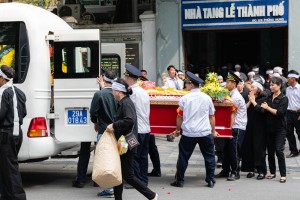 My lunch being cooked at a street side vendor!  5000 Dong, .22 cents. I’m going to spring for a bigger dinner.

Tonight’s dinner was noodle soup with duck.  Very tasty but served very hot.  $2.38 USD including a Coke.  A street vendor near the railroad tracks.  The bowl is about 9″ across.  I learned how to eat this with a spoon and chopsticks.  It’s okay to slurp

The previous guy (from the funeral) may have smoked too many of these…Thuoc Lao pipe.  It is inhaled and is stronger than a regular pipe.

A potential customer checks out the birds and bird cages while the store owners look on.  There are real live birds in every cage,

As a kid I used to play a game called Chinese checkers where you try to move all your marbles across the board before anyone else.  This, I’m told, is the Vietnamese version of Chinese checkers.  Apparently, these guys have lost their marbles!

As the old saying goes, “Shave and a haircut, two dong!”  You need to say it kind of sing-songy.