Posted on October 21, 2019 by rongatesphotography

I arrived in Vietnam last Friday after an overnight flight from Ulaanbaatar, Mongolia through Seoul, South Korea.  I had arranged for my Vietnamese visa online to speed up the clearance process.  I’m glad I did because the “speeded up” process only took two and a half hours.  I can’t imagine how long it would have taken if I hadn’t done that.  I did talk with some others who cleared Immigration much quicker.  It must have been the number of flights arriving at the same time.

Anyway, my driver was still waiting and got me to my hotel.

Friday night I went exploring.  My hotel is located on the edge of the Old Quarter and I was told one of the streets is closed down to car and motorbike traffic at 7pm on Friday, Saturday and Sunday nights and it becomes a street market.  I got some street food and walked a couple of blocks in the market.  Lots of people and I had been warned to be careful here as there are pickpockets working the crowd. 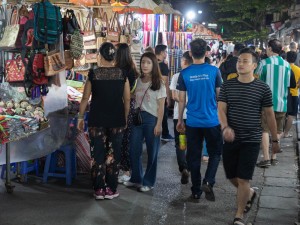 I also attended a water puppet show not far from the market.  Interesting but not great. 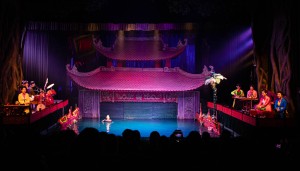 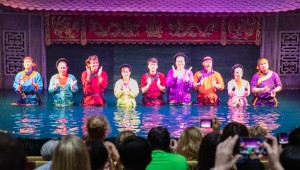 Saturday morning I was picked up by a van to head to Sapa, a mountain town northeast of Hanoi about 6 hours for a two-day, one-night trek and homestay.  From the van we switched to a sleeper bus.  Room for 20.

Double decker sleeping compartments.  This was something new to me.  Pretty comfortable even though we made the trip during the day.  The backs could be raised into a convenient sitting position.  Some interesting views out the window. 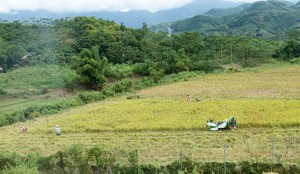 Sapa reminded me of a Vietnamese version of Myrtle Beach.  Lots of shops selling to tourists and many street people selling crafts.  Although there were some beautiful scenes. 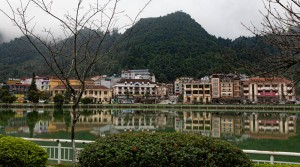 Once in Sapa, we met our guide, had lunch at the hotel and headed for our homestay.  A trek of about 6 miles.  I wasn’t too concerned about the distance but when our group of 10 left the hotel it was nearly straight uphill (“only about 20 more minutes and  it’s downhill from there” our guide would say).  Well, everyone was in their 20’s except for a 63 year-old man from Australia and me.  I made it to the top and down the other side but not without a struggle. 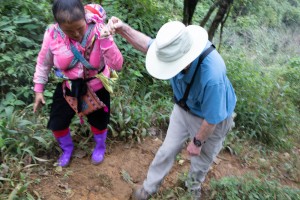 The smiling picture of me is when I got to the top.  It was very muddy and slick.  A number of us…including some of the youngsters got a little hand holding along the way to keep us upright.  Several people took a spill in the mud.

The pounding on my knees going downhill was more than they could take and finally, my left knee was so painful that the last 3-4 kilometers was done on the back of a motorbike.  The hike over the hill offered us a great view of the terraced rice fields.  That was one of the reasons I’d signed up for this tour. 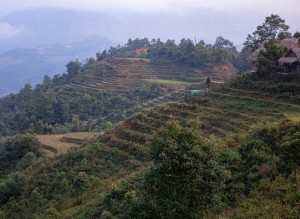 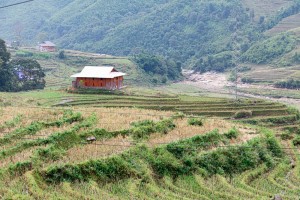 It was pretty foggy near the top but as we worked our way down the fog began to clear.

The homestay was very good. Our guide and all of the other guides in the area are Vietnamese Hmong’s.  This was Zn, our guide.  She’s 38 and his five kids.

There was a total of 16 of us at her house.  Six ladies from the Netherlands had arrived earlier and our group of 10.  Dinner was family style and there was plenty of good food.

The home belongs to our guide seen here pointing out something on the neighboring hillside.

We slept in an upstairs dormitory….sixteen mattresses with mosquito nets…arranged around a open view of the first floor in the center.  Had a great night’s sleep.

The next morning, after breakfast and while waiting for my motorbike ride to a waterfall, I shot a few images around the homestay.

We had a short stop at a waterfall, lunch at a local restaurant in a small village and then a van ride back to Sapa to catch the afternoon bus back to Hanoi.  This was was also a sleeper bus but arranged a little differently.  Three double-decker berths across the bus.

Got into Hanoi about 10:30 and back to my hotel.  I’m doing some photography around Hanoi today.  Tomorrow I leave for a three-day, two-night boat trip on Ha Long Bay.  Back into Hanoi on Thursday night then a daytrip to Ninh Binh.